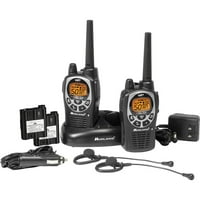 The two main bands two-way radios use are the General Mobile Radio Service (GMRS) band and Family Radio Service (FRS) band. The GMRS band is more powerful, and you are required to get a license to operate using it.

What range does the best two-way radio cover?

Two-way radios can communicate with each other on distances of up to 5 miles or more. The range of the radio is proportional with wattage and power, so if you want a two-way radio to communicate over greater distances, look for a powerful model that operates on the GMRS band.

How many channels can I get with a two-way radio?

GMRS radios can have up to 23 channels, whereas FRS channels generally don t go over 14 channels.

Mobile apps
Walmart Services
Get to Know Us
Walmart.com
Customer Service
In The Spotlight
Shop Our Brands
© 2020 Walmart. All Rights Reserved.To ensure we are able to help you as best we can, please include your reference number:
Thank you for signing up!

You will receive an email shortly at:

Here at Walmart.com, we are committed to protecting your privacy. Your email address will never be sold or distributed to a third party for any reason. Please take a minute to review our Privacy Policy

How was your experience?
(1 = Unsatisfactory, 5 = Outstanding)

Your feedback helps us make Walmart shopping better for millions of customers.

Your feedback helps us make Walmart
shopping better for millions of customers.

We’re having technical issues, but we’ll be back in a flash.